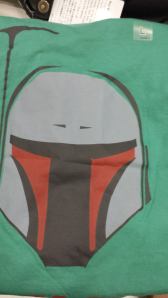 I consider myself to be a geek. I grew up wasting all my money on comic books… though I wouldn’t really say wasting… I loved every comic I bought, and it helped my imagination run wild. Until now I catch myself thinking about mutants, super heroes and epic battles… during office hours HA HA. I watched all the movies like Star Wars and Star Trek, all the cartoons like the Japanese robot cartoons (Voltron and Voltes V) and everything in-between.

I used to have the metal transformers. I also used to have a whole bag of Star Wars. Boba Fett was one of my favorites. I made him fly all over the place, and so it was disappointing to see him fly such a short distance in the battle of Tattooine in the movie, and then fall into the jaws of that monster right away. He has so much more potential.

We grew up with Star Wars. Then found out that there were 3 episodes before that. They were good, but could have been better without JarJar. Now there are three more after. That just makes it more exciting.

Thanks, Eric, for the shirt! I won’t even wash it before wearing it to work tomorrow. I think I’ll fit right in. A lot of people say that Congress is like the Dark Side of the Force anyway. 😉