I just got home. We left Don Bosco in Bicutan at 4:30PM and I just got home 30 minutes ago. What a horrendous experience that I am slowly beginning to convince myself was all a dream. Though my sore legs beg to differ.

I remember during Ondoy that there were so many stories of people being stranded for hours and hours in their cars. And during storms after that, there would be stories of bad traffic jams. A few years ago I got stuck in a 3-hour one exiting Skyway at Magallanes. Though I was just a passenger then, and it was during a storm. We were also coming from Don Bosco at the time.

This afternoon, it rained hard for about an hour. Then stopped. Then rained again. We left Don Bosco at 4:30PM, after Mass. And, I was going to go pass C5 to be able to go to my meeting, but I thought that it was still early, so I could actually pass EDSA and drop off some of the missionaries who needed to go there.

Everything was going good until we exited the Nichols Toll Booth. And we stopped. In traffic. For FOUR hours.

And just like any situation, we made the best of it. Telling jokes. Making fun of one another. Sleeping. Walking (yes, along SLEX) around. And anything we could think of. Even pictures: 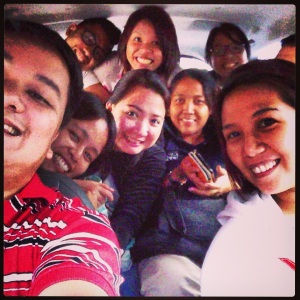 But, it was a huge parking lot. I had to turn off the engine, and we ended up inhaling fumes from buses beside us. Thank God the rain stopped by the time we got stuck. And only began to rain again when we got out 4 hours later. 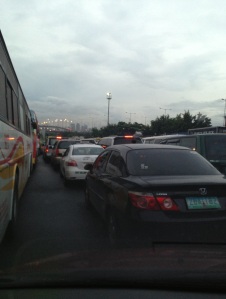 I tweeted the Skyway. We looked at pictures of the huge traffic jam. It was disheartening. We got no reply too. So I searched the telephone number of the Skyway office and called. In fairness to them, they were calm and they answered my questions. They told me to U-turn if I could, and use C5. But at that point it was impossible. They said the rains caused a huge flood at Magallanes (waist high), and so cars could not pass until the flood subsides.

After so, about 3 and a half hours, we decided to pray the rosary. Yes, I know, we should have done that first. But we didn’t know it was going to be THAT bad. And while we prayed, the cars started to move. And after we prayed, we moved faster… and got out of the traffic jam / parking lot. It was an answered prayer. I also WeChatted Des to tell the kids to pray for us too. And that all worked. Faith works wonders.

What an experience. I never thought I’d go through something like that again. And while I was driving. But I had a good time with friends making everything lighter. And more fun. I was Van Diesel in the movie the Slow and the Furious. And I am glad we are finally out of there.

Thank you King of the highway. King of the road. We can now all attest to Your power. (thanks, Paul!)