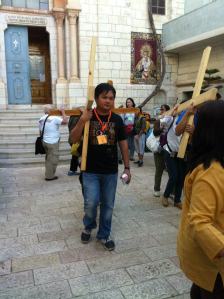 Today was THE day. We woke up extra early to make it to the Old City when they open the gates (apparently they close the gates every night). We would be doing the Stations of the Cross in and around the city, and it would be chaos if we went when all the shops were open.

10 of the stations were around the city while the last stations were all near each other in the surrounding area of the Holy Sepulcher. And the stations around the city really did go through main roads with cars and trucks passing by. It goes through stalls and stores of people selling anything and everything. And if we did reach opening time, 94 people doing the Stations of the Cross would be chaos.

I carried the cross with Des for the length of one station to another. It pales in comparison to what Jesus carried. It was definitely lighter. We wore better shoes for the pavement. We weren’t whipped and cut up before doing it. There were no people jeering and spitting at us. But it still tore our hearts. How could we allow this to happen to Him? How?

We got to the area of the Holy Sepulcher. You go up a few steps to see the place where the Cross was put. And then back down to see the slab. And then a few steps away, you see the empty tomb. This is what our faith is about. The passion, death and resurrection of Jesus! The victory in seeming defeat.

What is sad though, is in that area, is that there are different Christian Churches that own parts of the Church. Some Catholic, others Orthodox, or Coptic or Assyrian. Every few steps, you see different decorations and different people. There are stories of fights between caretakers. Just because of a few inches.

It pains me that there is no peace. Not only among Christians, but also in this land. Israel is under so much stress with their surroundings. Why can’t there be peace? I reflect on CFC, and see that in our own local reality, there is no peace as well. Court cases, and the like, are still active. When we are all doing the same thing, and believe in the same thing.

If there is one thing I can take home from this life changing experience – it is peace. Peace for myself. Peace in everything that I do. Peace towards others. 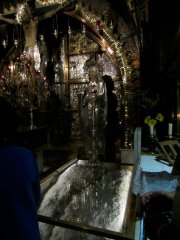 Where the Cross was put on Golgotha

The slab where Jesus’ body was put after His death 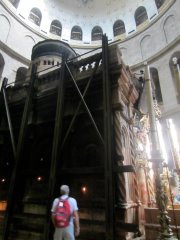 We rounded up the day with stops at the Church of Peter’s Denial which is also Caiaphas’ house, the pools of Bethsaida, the home of St Joachim and St Anne (the birthplace of Mary), the Wailing Wall and the Ratisbonne Seminary of Don Bosco.

My feet are sore, but this is all worth it. Each step I took, and still take, is towards peace and unity.