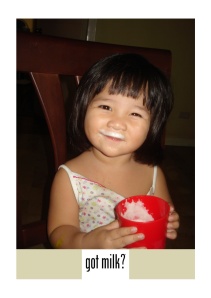 (ok, this is Aida. I just wanted to share her cute milk poster)

Yesterday, Des and I brought the kids to Mass with us at Christ the King. It was the afternoon Mass after we played in Fun Ranch. We sat at the back because we knew the kids would be restless, and so we would need to exit now and then just to let them run around a bit.

In the main Church, there are stained-glass windows depicting the Stations of the Cross. And since we were sitting at the left side, we had a view of the last few Stations. Sabine saw the one with Jesus on the Cross. I noticed her looking up and having a puzzled look on her face. She probably was thinking and trying to answer her questions by herself… but when she couldn’t, she asked me.

“What happened to Jesus?” pointing to Jesus on the Cross. I said “Jesus is on the Cross there.” (at this point, I knew where this was going.. so I was getting nervous about explaining everything so she can understand).

“Why is he on the Cross, daddy?” “Because he was telling the truth, and people were mad.”

“Why were they mad?” “Because they did not like to hear the truth.”

“Why?” “Because some people are like that. They don’t want to listen to the truth”

And then she looked at Jesus resurrected. So I took that as an opportunity to explain that as well. That even with the Cross, if we tell the truth, then we end up in Heaven 🙂

At this point, the Mass started. And so I told her I would explain everything after the Mass. Unfortunately (or fortunately?), she fell asleep during the Mass. And so this will have to wait for another day.

In the meantime, I better research!

PS. I just watched Michael Voris’ special “Weapons of Mass Destruction” about the current Mass and the Latin Mass. VERY INTERESTING. I want to try attending a Latin Mass.