I went to the Nacionalista – NPC Miting de Avance last night in Tondo. It is kind of out of character for me, because I don’t really like going to far places, especially if I know there will be thousands of people there. But, I knew that I had to go there. My support is not just verbal. It is total.

We left Antipolo at about 4PM, picked up co-workers and family along the way. With 4 major Miting de Avances happening at the same time, you’d expect major traffic all around Manila. None. We hit traffic when we got to Roxas Boulevard, near Intramuros. And from there, it was traffic all the way to Tondo. We even saw Bongbong’s Prius caught in traffic. So we knew we weren’t that late. We got there about 6, and the program was just about to start 😉 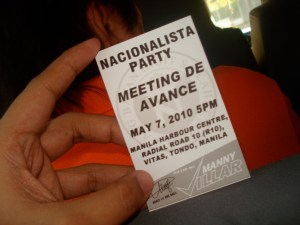 My goal, aside from supporting Manny Villar and listening to the speeches, was to have my picture taken with as many people as possible. And whoever Senator I have a picture with, I will vote for… Haha just kidding!

The emcees were funny (Joy Viado and Cacai). And the Miting got on right away. I tweeted the whole thing. What I liked about hearing all the speeches, is I got to hear what their plans are for the country. More than just reading and researching about it, I heard them speak about it first hand. With passion in their voices and the desire to serve in their eyes. It was engrossing! You don’t really notice that 11 people (Satur Ocampo, Liza Maza, Gilbert Remulla, Monmon Mitra, Martin for Ariel Querubin, Miriam Defensor Santiago, Pia Cayetano, Toots Ople, Adel Tamano, Gwen Pimentel and Bongbong Marcos. Bong Revilla wasn’t there) have spoken and numerous artists (Alinah, Ara Mina, Geneva Cruz, Jessa Zaragoza, April Boy Regino, Sarah Geronimo, Bugoy, Wowowee) have performed.

His story is YOUR story. He came from the poor. And the country is 80%+ poor. And he was able to get out of poverty. When you see him, you see yourself. You see what can happen to you. His dream is our dream. We don’t need to have a country mired in poverty and corruption. We can be like our neighbors and pull ourselves out of this. We CAN do it. If we elect someone who is willing to WORK HARD to make it happen. And someone who KNOWS how it should be done.

I had tears in my eyes listening to him. He told the kids that the song they sing: Hindi bawal mangarap, ang mahirap – is something they should never forget. Do not lose your dream. Do not be eaten up by the world. But he also said, that God-willing, when these kids grow up, there will be no more MAHIRAP in the Philippines.

Manny Villar is the best man for the job. He can lead us to a BETTER and BRIGHTER Philippines.


Willie and Dolphy speaking about Manny. Both came from the poor. And both also lifted themselves out of it. And they see that Manny can do the same for the rest of the people, who they used to be like. 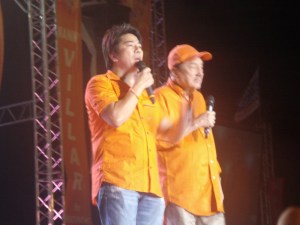 The Senatoriables coming on stage together. A UNITED front. Walang laglagan 🙂 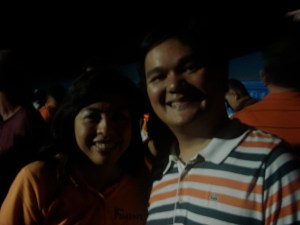 Gwen Pimentel (she was on fire! One of my favorite speeches)
(I have one with Monmon Mitra, but it is too dark. And Lil has one with Martin, son of Ariel Querubin) 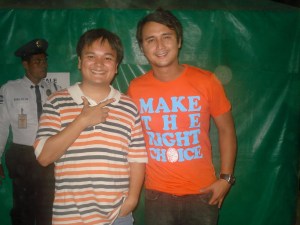 John Estrada (wait, he is not running for Senator). Lil has one with KC Montero. Aunt Marty has with Louie (the guy who wear off-shoulder clothes) and the Main Alalay of Wowowee. 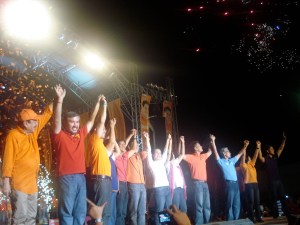