>I was invited to the Christmas Party of Ang Kapatiran over the weekend. I went straight after the YouthPinoy 2010 planning. Des and the kids were supposed to follow, but Aida started acting up, so they went straight home.

When AKP fielded their first Senatoriable in 2007, I supported them all the way. Adrian Sision, Jess Paredes and the other guy (I say other guy, because he was a wolf in sheep’s clothing, apparently. He is now in the Liberal Party supporting the RH Bill).

Now they have 9 Senatoriables. I had pictures with 4, like a fan. 🙂 One of them, Tarzan Tarrazona, is the father-in-law of my cousin! Jo Imbong, who does lawyering work for the CBCP, is the mom of a good friend and classmate of mine. And these people are good people. So I don’t feel bad in supporting them at all!

It was a nice, family-feel affair. And I had fun 🙂 Good luck guys! Here are my pictures. I need to lose weight. 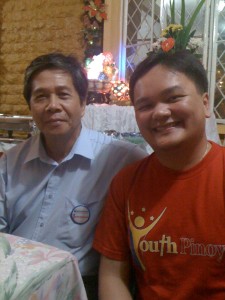 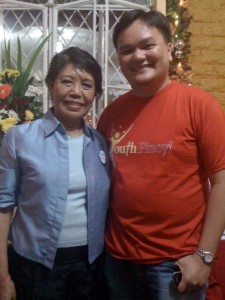 I truly believe in this party. And it was a plus to meet and speak to their candidates. It’s nice to hear from people who are running because they truly want to serve. And not for selfish purposes. Check them out.

They have 9 Senatoriables, so that will leave you 3 more to choose from other parties. Choose PRO-LIFE PEOPLE!