>I went to the NYC Halloween Parade last night in downtown Manhattan. It actually did not occur to me that it was Halloween. I am not used to celebrating a big “event” when I am out of Manila, so it just dawned on me a few days ago that we would be in the area for Halloween. Of course, we HAD to check out the parade. NYC is notorious for the costumes and the festive atmosphere…. among others. We just had to see it for ourselves.

We spent the day with Crisa, lunch at Calle Ocho and then walked around Central Park until it was time to go downtown. Met up with CFC SFL and walked to the parade area. It was about 6, so it was early. There were people already, and interesting costumes started coming our way. At about 7, it was SO CROWDED. You could hardly move! We tried going to another area, but there were flashes of Wowowee, with everyone squished together and pushing to get out. We eventually just went to a safer place with not as much people. 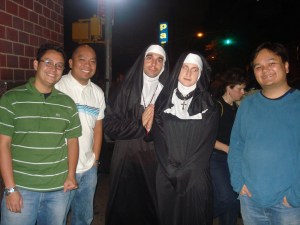 Seriously, this costume freaked me out. I didn’t want to have a picture taken with him at all.

How could I let this one pass?

At about 7:30 it started to rain hard! And the parade didn’t even start yet. It was POURING. Poor guy above (not us, the one in the briefs) was freezing. Well, look at what he is wearing.

It was pouring, we were surrounded by devils and demons…. it was time to leave. It was a good experience, but it was just… enough. The rain was a reminder that this “event” just needs to be cleansed. Why should we celebrate evil? When celebrating good is much more fun.

We left downtown, and started our journey to NJ. Still surrounded by scantilly clad nurses, X-Men characters, people with disfigured faces, devils, demons, priests, nuns, Ghostbusters, transvestites… What a night to remember that we still have so much to do.